Kythera is known as the birthplace of Aphrodite, the goddess of love and beauty. According to legend, she was born from the seed of Uranus, the God of Heaven, when his genitals fell into the sea after they were cut off by his son Cronus.
Aphrodite rose from the foam of the sea. After she had risen Zephyrus, the West wind, blew her in a shell to Cyprus. 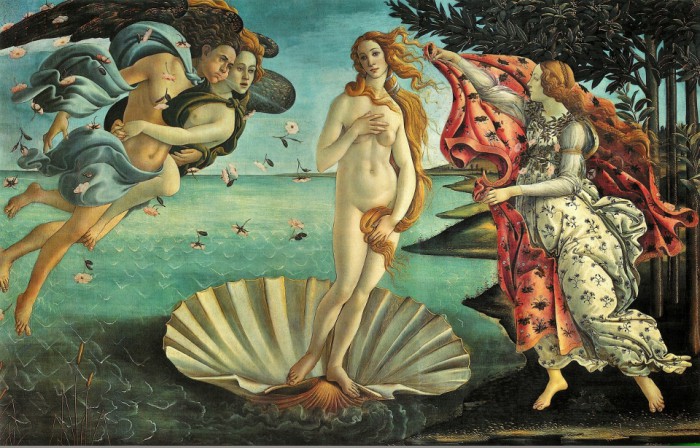 The island – Aphrodite in the version of Botticelli

Today this mythological occasion is recalled by “the bath of Aphrodite”, a hollow peak in a rock at the beautiful beach of Palaiopolis. 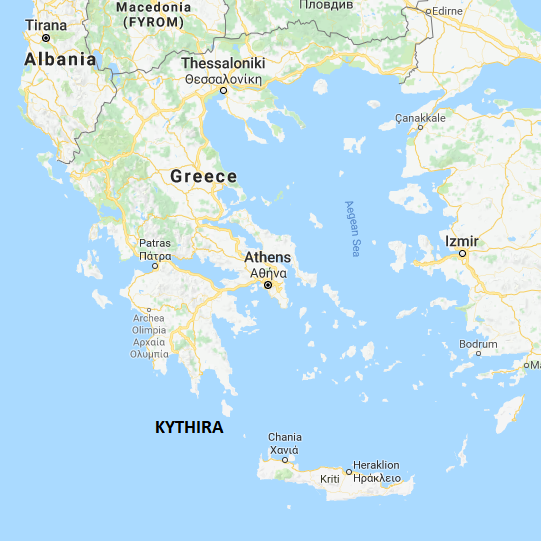 Kythera officially belongs to the Ionian islands (together with Corfu, Zakynthos, Ithaca, Kefalonia, Lefkas and Paxos). However it is located much further south at the southern tip of the Peloponnese at the mouth of the Laconian Gulf.
The island lies at the crossroads of 3 seas, the Ionian, Aegean and the Cretan Sea. With its surface area of 284 km 2, it is one of the greater of a total of approximately 1,400 Greek islands. Although Kythera has no high mountains, it has a hilly landscape with many fertile valleys. On the eastern side the island mostly slopes down gradually to the sea ending at some beautiful beaches. This in contrast to the western side which often descends with a spectacularly steep drop into the Ionian Sea. The beaches of the island are mainly found in the east and the south. They consist of pebbles and sand and some are characterised by a beautiful red colour.

Kythira has a mild Mediterranean climate. The average annual temperature is 19 degrees which makes the island one of the warmest places in Greece. The island has one of the highest number of hours of sunshine in the whole Mediterranean area. Along the coast the climate is generally a dry, but over the rest of the island there is regularly a refreshing rain shower. The island is characterised by the Prevenza. This is a dense fog that arises as suddenly as it disappears. In addition, the hottest summer days are often cooled by the Meltemi, a fresh sea breeze.

Another particular phenomenon are the Alcyone days. This is a period in January of about 2 weeks during which it is warm like on a Summer day and virtually windless.

The island – Alcyone, the kingfisher, on Kythera

According to Greek mythology, this is due to Alcyone, the daughter of the God of wind, Aeolus. Alcyone was married to Ceyx, the son of Eosphorus, the morning star. Ceyx and Alcyone called themselves Zeus and Hera, to the great displeasure of the real Zeus, the supreme God. Zeus was so angry that he hit the boat of Ceyx with his lightning bolt, causing it to sink and Ceyx drowned. In a vision Ceyx came to Alcyone to tell her what had happened to him. Alcyone was so torn by grief that she threw herself into the sea and also drowned. The Gods felt sorry for them and decided to change them into Halcyon birds (named after Alcyone and also known as the kingfisher).

As a kingfisher Alcyone lays her eggs each year in January on the beach and nests near to the sea for about 1 to 2 weeks. To make sure that nothing happens to her, her father, Aeolus (the god of wind), keeps the wind quiet and calms the waves.  The expression Halcyon days is therefore generally used to describe a peaceful period. 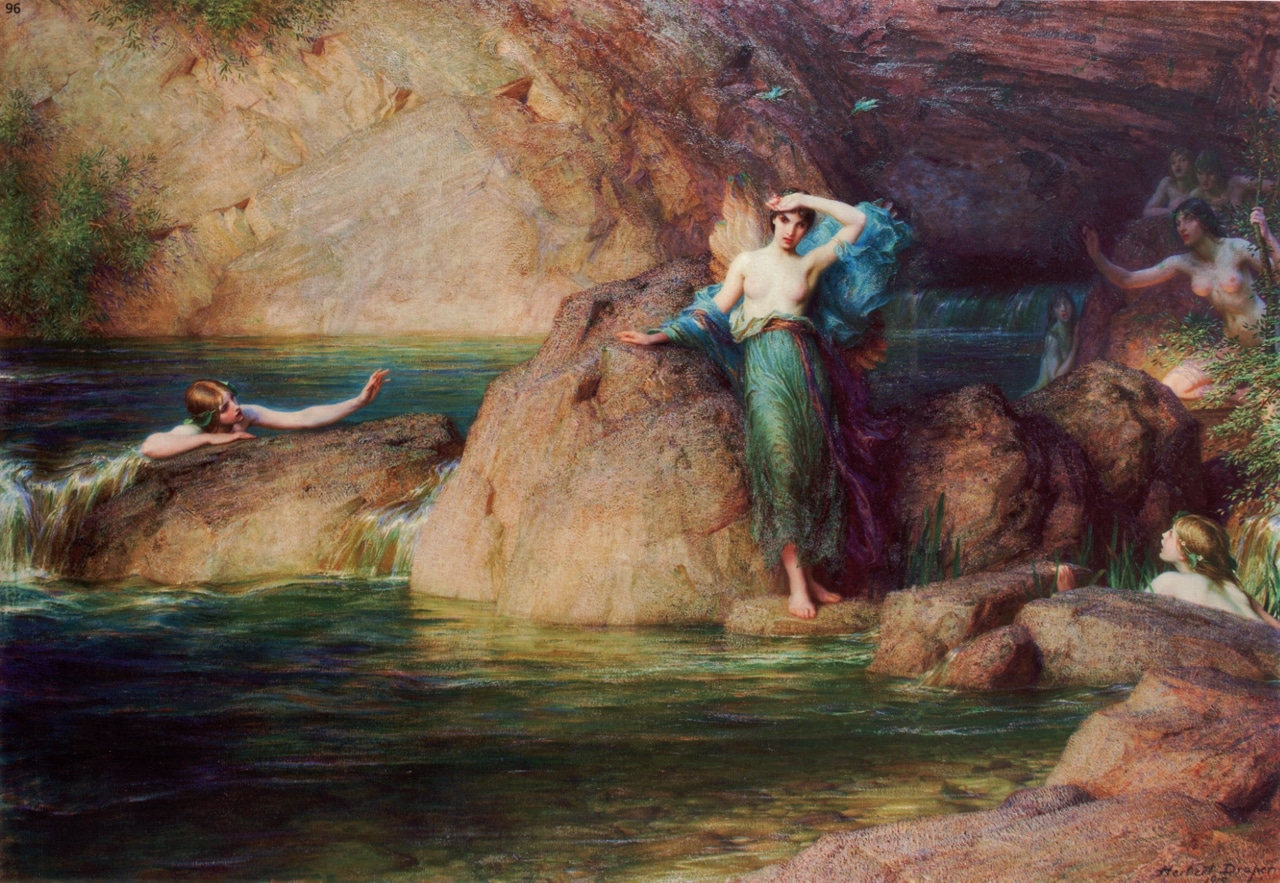 The island – Alcyone throws herself in sea – H.J. Draper

History:
Partly due to its strategic location in the Mediterranean Kythera has a turbulent history. Archaeological excavations have shown that Kythira was already inhabited by people in 3000 BC.
The island has been under the influence of both the Minoan and the Mycenean empire. In the area around the present day Palaiopolis they founded the city of Kythera with its commercial port Skandeia (presumably near the present Avlemonas). On the hill behind Avlemonas in the vicinity of the historic church of Agios Georgios Minoan tombs were discovered during various archaeological excavations.

During the Peloponnesian War, due to its strategic location, Athens and Sparta fought a fierce battle for domination of the island. Kythera was alternately in the hands of the Spartans and the Athenians. After the end of the war Kythera gradually went into decline and for long periods was sparsely inhabited or even abandoned.
After the conquest of the island by the Byzantine Empire Kythera experienced a period of development during which time many settlements were founded and a large number of churches and monasteries were built. During the Byzantine period, Kythira however, was again sparsely inhabited. This was due to many lootings by Arab pirates and Vikings.

In 1204 AD the island was conquered by the Venetians and a number of forts were built as well as the settlement of Paleochora. The former capital of the island, which was built in a strategic location surrounded by canyons. At its peak it had over 7000 inhabitants. In 1537 it was completely destroyed by the pirate Barbarossa. The Venetians ultimately prevailed on Kythera until 1797.
Between 1797 and 1809 Kythera was occupied by the French followed by the English. With the advent of the British, the island quickly evolved. There were many roads built and also schools and bridges. A water and sewer system was installed.

In 1864 Kythera entered the newly established Greek state. Like much of Europe it was occupied by the Germans during the 2nd World War. On September 15, 1944 Kythera was the first Greek territory to be freed by the Allies.
Given the poor economic situation after the war, many islanders emigrated to Australia. Since then, many of the older emigrants returned to the island. This is probably why the nickname of the island is ‘Kangaroo Island’ and the majority of the population speak excellent English.

Main attractions:
Kythera consists of no fewer than 66 small villages, most of which are still largely original. It is advisable to park your car to the side the road and discover these villages by foot. Then they reveal their true beauty. In places such as Chora, Frilingianika, Aroniadika, Potamos, Mitata, Mylopotamos, Dokana, Kypryotianika, Pitsinades, Aloizianika, Logethetianika and Karavas you will find narrow alleys, donkey paths, beautifully restored buildings, ruins, old Kamaras, arches, wells, village fournos, centuries-old walls and trees. It will feel like stepping a hundred years back in time.

In the spring Kythera is a paradise for flower lovers. Greece has the richest flora in Europe. Of the 6000 species about 10% are found only in Greece. Kythera also has a few unique species. From December the first wild flowers start to bloom and only after it gets very hot in June does the flower abundance stop.
Dozens of beaches surround the island. Many are only accessible by sea. Outside the main season the beaches are almost deserted and you can imagine yourself on a deserted island. Beaches as Kaladi, Firi Amos, Limni, Routsounos, Melidoni, Kalami and Chalkos are often only accessible by dirt roads in poor condition, but your efforts will be rewarded. 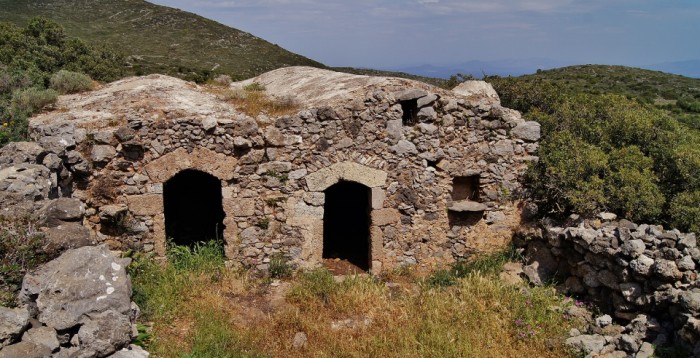 Almost from every spot on the island you will have a view of a small church. There are hundreds scattered around the island. Often they have a unique architecture and churches of nearly 800 years old are not unusual. Besides churches, there are also some very beautiful monasteries on the island. Moni Myrtidion, situated in a quiet spot in the south-eastern part of the island, is considered the most important and most beautiful monastery. Regularly there are processions involving the icon of the monastery, which is carried around the island from one village to another.

Besides the scenery, architecture and beaches Kythira has many other attractions such as:

– The ancient city of Paleochora. This was the Byzantine capital of Kythera, surrounded by a number of deep gorges. The people thought it would be safe from attack. But in 1537, the Turkish admiral Barbarossa with his Algerian pirate fleet attacked the island and conquered the town. In order not to fall into the hands of the pirates, hundreds of inhabitants of the town jumped to their deaths into the canyons. Since then the town has been abandoned. Walls have collapsed and roofs are missing. Nevertheless the mysterious atmosphere, the unique location and spectacular natural environment leaves you with a memorable impression. 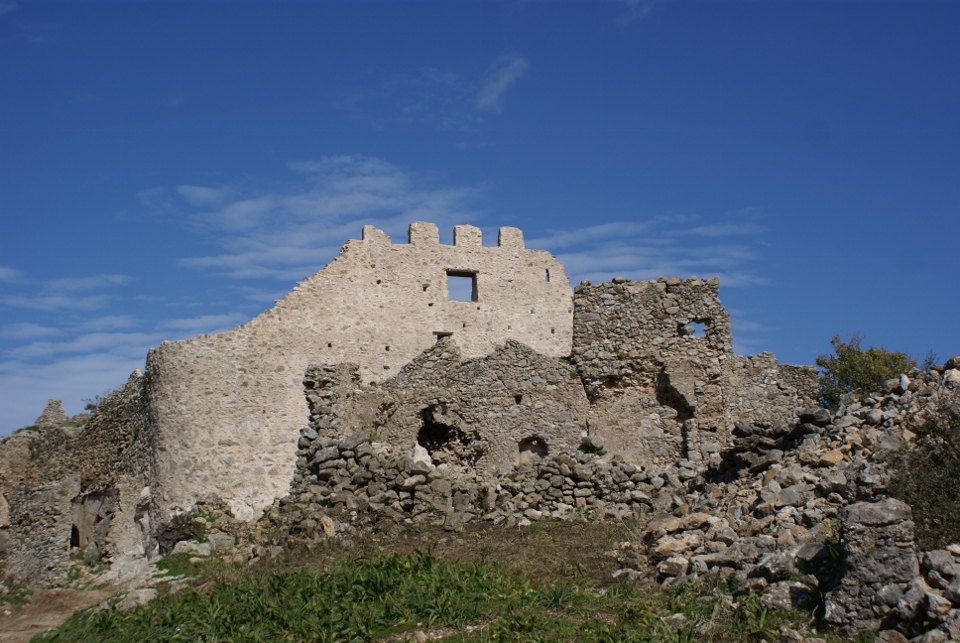 The island – the ruins of Palechora

– The capital city of Kythira, also known as Chora, is a unique town, founded in the 13th century by the Venetians. It has a medieval character with many narrow alleyways. Immediately below the renovated Venetian castle lies Mesa Vourgo, a protected area. It was built in the 16th century with houses in the Cycladic style and a large number of churches. Inside the renovated Venetian castle, built in 1503, there are still a number of special post-Byzantine churches to visit: Ayios Ioannis Prodromos, Panayia Orphani and Panayia Myrtidiotissa. The later operated up to 1806 as a Catholic Church. There also remains a part of the palace of the Venetian governor, now being used as the Historical Archive. In addition you can still see the old powder stores, some impressive wells and two aqueducts

The island Kythera – Chora and the Kastro

– 2 km away from the capital is Kapsali, a port that is located on two horseshoe-shaped bays. Between the two bays there is a small peninsula with a church and a lighthouse built by the British. The sandy beach of Kapsali is largely protected from the wind by the natural bay.
On the rocks above the town is the monastery of the Apostle John. This was built in his honour in 1592 and is called Agios Ioannis Engremnos. The church is located in a cave is where the Apostle John lived before he travelled to the island of Patmos, where he wrote his ‘Revelation. At the end of the second bay you will find the Lazarete, a historic building with unique architecture that served as a quarantine site for sailors.

– At the edge of the village Mylopotamos to the east of the island the settlement Kato Hora is located. This is in fact a deserted Venetian city and a unique example of architecture from this period. Above the entrance to the city you will find as usual the relief of the Venetian lion carved in stone.

– In a gorge just outside the village of Mylopotamos (translated ‘Mills on River’) the waterfall Nereida is located in beautiful surroundings. This is also called the Fonissa (murderess) waterfall named after a murder which took place there according to legend. The gorge runs right down to the sea where it ends at the magnificent beach of Kalami (Greek for bamboo). On the seabed just off the coast are some old cannons which are remnants of a sunken ship.

– The island is characterized by a number of fine English architectural works such as the English School in Melapidia and the bridge of Kadouni with a length of 110 meters, it is the longest stone bridge in Greece. 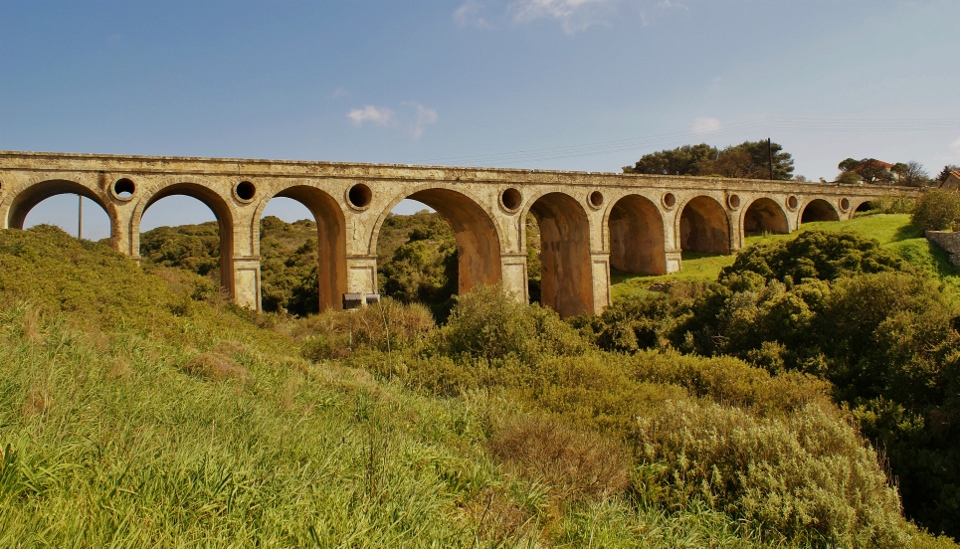 The island – the bridge of Kadouni

– There are several caves on the island. Ayia Sophia cave near Mylopotamos, the cave of the same name in Kalamos and Houstis cave in Diakofti are all certainly worth a visit.

Any cookies that may not be particularly necessary for the website to function and is used specifically to collect user personal data via analytics, ads, other embedded contents are termed as non-necessary cookies. It is mandatory to procure user consent prior to running these cookies on your website.